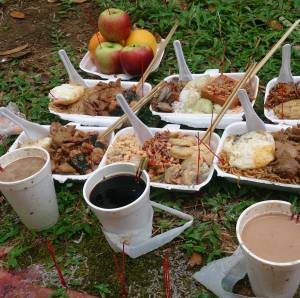 The seventh month in Singapore is a truly special one. It does not refer to July but rather, the August to September period when the seventh lunar month generally occurs. And unlike the other lunar months, the seventh also goes by a different name: Ghost Month.

The Ghost Month, also referred to as the Hungry Ghost Festival, is a period in which all spirits are released from the netherworld into the human realm. It is unlike Halloween, an increasingly secular celebration which has moved away from pagan roots, and unlike the Japanese Obon festival or the Chinese Qingming festivals which allow people to pay their respects to deceased ancestors. During the Ghost Month, people remember the dead, be they young or old, and alleviate their suffering through the giving of food offerings and the burning of joss sticks and joss papers.

During the seventh month, many strange and curious sights may be seen in Singapore. Silver and gold papers freckle across the landscape everywhere and an ever-present scent of smoke lingers in the air. Red candles line roadside pavements and fires are left to flicker in tarnished bins throughout the night. People pay their respects to the dead in public by burning incense and holding glitzy concerts at unholy volumes. Despite the modernity of the lion city, Chinese superstitions are still a large part of the local Chinese culture, and these ideas exert a great influence over much of the Chinese population during the seventh month.

Here are a few of the most commonly-believed superstitions:

The seventh month is considered inauspicious, and many are leery of making major life decisions during this period. Whether you’re thinking of relocating, holding a wedding, or making a major investment, a common belief is to avoid doing so or making any kind of major financial decision during this period as the outcome will not be favourable to you.

The Hungry Ghost Festival is eponymous with scores of starving spirits that have just been released from hell for a month’s respite from their starvation. Food offerings such as cake, fruits and meat are left at shrines and also out by the roadside to sate the hunger of these spirits. No matter how tempting the array of foods left at the shrines, taking these offerings could incur the wrath of the spirits and bring misfortune upon you.

It’s not just food that’s left out for the ghosts. Red candles, usually lined up considerately at pavement edges, are a common sight. Papier-mâché cars, houses and iPhones also seem to be going up in flames everywhere. Believing that loved ones receive money and material goods when one burns paper representations of these items, the gifting of offerings is especially popular during the seventh month where the dead come out to play. Unfortunately, these are usually left on the ground and are easy to step on, especially at night. Many horror stories begin with an ill-fated pedestrian who finds himself stalked by the unhappy denizens of the netherworld after this fatal misstep. If you do tread on any offerings by mistake, apologise aloud and walk on.

Whether we’re talking about Asian or Western spirits, many people believe that ghosts tend to appear at night. Whether their presence is simply more noticeable due to the decrease in human traffic and activity at night, or whether they grow in strength as the hour grows late is debatable. In Chinese belief, spirits are bolstered by yin energy—energy that is associated with the night, the moon, and the feminine. During the Hungry Ghost Festival, avoid staying out late and you might lower your chances of meeting one of them.

During the seventh month, numerous performance stages pop up in empty fields all around Singapore where concerts are held into the late hours of the night. Traditional puppet shows and Chinese opera performances had used to dominate these stage acts, but these days, popular Chinese and Hokkien songs are performed by singers and dancers in glittery costumes on vibrantly-coloured stages. Though the appreciation of the human audience is of course appreciated by the singers, the getai is intended for the entertainment of the dead, and as such, the best seats in the house, i.e. the first one or two rows of chairs right in front of the stage, are traditionally reserved for the spirit audience. Even if you scoff at the idea, it’s polite to stay away from these chairs to show your respect for these cultural beliefs.