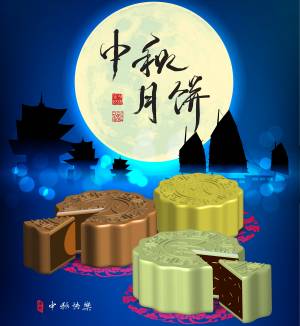 Held on the 15th day of the 8th lunar month, the Mid-Autumn Festival encourages people to spend time with their family, as well as to take time to appreciate the finer things in life, such as the heady fragrance of good tea or the transient beauty of a full moon. In Singapore, we’re certainly great believers in this philosophy, where our passion for food has led to many locals going so far as to refer to this special day as the Mooncake Festival.

In the days leading up to the festival, many bakeries across the island take great pains not only to produce delicious mooncakes for this festival, but also to ensure that these lovely treats are packaged in exquisite boxes that are almost too beautiful to tear into. While this certainly drives costs up, many people are more than willing to splurge on this annual indulgence—making pre-orders a must if you’ve had your heart set on a particular limited set.

As early as July, mooncakes start to appear on the shelves of local bakeries. These ubiquitous delicacies are so well loved by Singaporeans, that many purchase mooncakes well before the day of the festival itself to be presented as gifts to family, friends or even work associates.

Though they may appear plain at first glance, traditional mooncakes are made with ingredients that hold symbolic meaning and are typically decorated with embossed flowers. Sometimes bakeries inscribe Chinese characters on the mooncakes instead. As mooncakes are usually large enough to be sliced into quarters, it’s common to find a two or four-character bakery name, proverb, expression, or even description embossed on the top of each mooncake. So while you could find mooncakes with a wistful "????" (an expression describing familial warmth experienced during the Mid-Autumn Festival) carved into the top layer, you could also find the more prosaic "??" which means that there are two egg yolks buried in the cake.

Mooncakes are traditionally made with a thin cake-like layer on the outside, and a thick lotus seed paste on the inside. A newer variant would be the 'snow skin' mooncakes "????" (lit. 'ice skin mooncake') which feature lotus paste wrapped up in a translucent, chewy coat made of glutinous rice. These mooncakes are available in white or green. Did you know that the green snow skin mooncakes are a delicacy that you’d probably only find in Southeast Asia? While white snow skin mooncakes can be found across many countries in Asia, the green variant is made with Pandan, a fragrant herb in Southeast Asia that imparts a unique freshness and sweetness to the taste.

Today, we are spoilt for choice. It is perfectly common to find snow skin mooncakes made in a wide variety of flavours, such as Earl Grey, cranberry, or durian. Many of the newer mooncakes also feature interesting designs on the top of each cake, including flower petals and butterfly wings. These mooncakes are not limited to simple green or white colours, so keep an eye out for an attractive rainbow display at your closest bakery!